Yes, I am Tatting Again!

So, it is official. Summer is over and Fall has arrived. Most of the harvesting has been completed and the canning should be done. Now it is time to get those winter projects in line. Which is exactly what I am trying to do.

All has not been lost to summer fun, I do remember how to tat.  Need proof.  Here is is.... 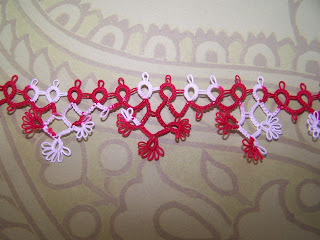 I found this pattern in an antique pattern book and knew I wanted to try it out.  It was called "Three Flower Scallop Edge"  I love it!  I did have to create a corner for the pattern and I was happy with that also.  I have completed two hankerchief edging with this pattern.  I am sure I will be making a few more.  It is a very simple pattern and I can almost do it without thinking.
Plus, my mother-in-law has inquired about baby booties.  So...I am making baby booties again and quess what!  I just found out this week I get a new grandbaby next summer.  Too bad this one is going to be in Alaska, but a great excuse to go visit.  So far I have completed three pair of booties.  Here they are. 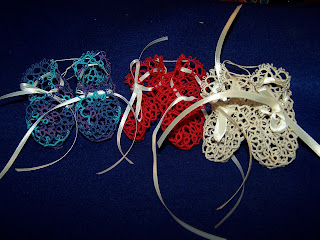 ﻿
I am currently working on a fourth pair in white.  So far I have cut the vamp on the second one out two times.  I can't seem to get it right tonight so I am putting it up for the rest of the evening.  Decided to update by blog instead.  Let everyone know what is happening in my world.
New babies, one grandson living in Michigan and going to college, one in North Carolina getting ready to build a computer.  One in Alaska, just learned how to crawl and my granddaughter is a star play on her softball team.  My dad is doing great and I have had another wonderful summer with him.  Let's see, what did I do this summer.  I went to Colorado spent a week on a mountain primitive camping for a week.  No running water, no bathroom...humm when was the last time you lived in the wild?  Wild, yes we saw a bear!  He was across the field, thankgoodness, not close to camp at all, but still very exciting.  All the guys decided to be macho and guns came out from every where.  I think every gug in the camp had at least two, if not more guns.  But the bear got away!  We did not see it again.  I even went White Water Rafting on the Arkansas River through the Royal Gorge.  Yes, me, who is not fond of the water got in a raft and when down the wild river.  It was great!  I would go again.
I aquired another dog.  One just like my Sadie, well almost!  Rikki is not has hyper as Sadie much more laid back and refined.  Must be something about being a year older and a male!  Humm I wonder if that really has anything to do with it.  Maybe it was just a better trainer.  Sadie is still on the wild side and I am not sure who is in charge, her or Rikki.  He has been with us just over a month and they still go around and around.  No major fights and they really seem to get along for the most part.
Plus the tatting I have been doing some sewing.  Doll clothes mostly, until the last two days when I made four Halloween Treat Bags.  I think they turned out cute.  Just have to wait and see if anyone else likes them enough to purchase.  I made two pumpkins and two skulls.  Have completed four doll outfits and have two cut out and ready to sew.  All fit an 18 inch doll.  Easier to make than Barbie Doll cothes.  I do like to sew so it is just another one of my winter projects.
Well enough for now.  I will try to be back soon and keep everyone update on my projects.
Posted by Angela at 7:23 PM

You have been so busy! - congratulations on the soon-to-be grandchild. I love your booties, what size thread have you used? - 20? or is it 40?
No bears in my neck of the woods, but great excitement a few days ago when I was out walking with two of my grandchildren, and we saw a koala up a gum tree, not half a mile from home! - I had only seen them in zoos before.

Wow, on the koala. In the pictures I have seen they are so cute. I am using size 20 for the booties. Size 40 makes they very small and difficult to do the vamp and top row. It can be done but can also be very frustrating.

Your edging is very nice, and the booties are all very beautiful! :)

The booties are so cute! Might I ask what pattern it is that you use? My niece just told us that she is expecting her first baby in April...I figure if I start now I might have some booties done by then!

The bootie pattern is by a Mrs. C. B. Platt. It is an antique pattern. I printed it from http://www.geocities.com/tatmantats/antiquepatterns/booties.html. However I am not sure that site is still up and running. email me at aanjel51atyahoodotcom and I will scan the pattern for you. I have made over a dozen pairs and can help you if you need with the pattern.